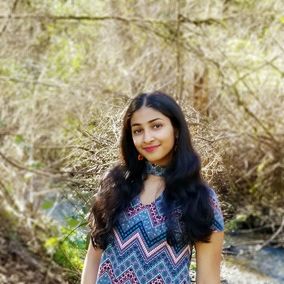 Founder & President
Sa​vitha Srinivasan ​​is a junior in the gifted International Baccalaureate (IB) diploma program at Interlake High School.  She is passionate about computer science and loves exploring its interdisciplinary applications to medicine, biology, and art. Her interest in CS was first sparked when she took a computational biology summer course, inspiring her to take AP Computer Science in her freshman year. She is skilled in both Java and Python and has worked on several CS projects that seek to tackle challenges in medicine and biology.  In addition, Savitha is the founder and President (2016-Present) of her school's Future Business Leaders of America (FBLA) chapter as well as the secretary of the Interlake Science National Honor Society (SNHS).

Savitha is also an accomplished dancer and violinist. She has has been studying and practicing classical Indian dance (Bharatanatyam) under the guidance of Dr. Joyce Paul Siamak for ten years at ARPAN, Redmond WA and completed her solo debut (Arangetram) at the age of 14. She enjoys playing the violin and has been a member of the Seattle Youth Symphony Orchestras (SYSO).  In 2014, she co-founded Art You (www.art-you.org), a youth-driven 501©3 non-profit organization that seeks to promote awareness of classical and cultural art forms within her community. Recently, she spoke at TEDx Interlake High School about the role classical art has played in shaping her life and Art You's efforts at bridging the gap between mainstream and classical art forms within the local community.

Her passion for exploring the intersection of art and technology inspired her to found She Codes Art. She believes that She Codes Art's unique interdisciplinary approach is key to bridging the gender and racial disparities prevalent in the STEM workplace. 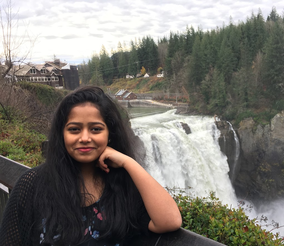 Publicity & Outreach Director
Priyanka Ganesha is a senior in the IB program at Interlake High School. Ever since she was 6 years old, she has been interested in STEM fields . However, after taking computer science courses at her high school, and becoming vice-president of her school’s Girls Who Code club, she truly fell in love with the world of computer science. Moreover, she is an avid member of Interlake’s Robotics Team, and works in its engineering sub-team. Additionally, she has been playing violin for 6 years, starting in the 5th grade and feels that it is a very important part of who she is because it’s such a unique way of expressing herself. Priyanka is also extremely passionate about LiveBright – the environmental-based non-profit that she is a board member of. In her free-time, she enjoys playing badminton on her school’s varsity team and drinking unholy amounts of bubble tea.
​
Above all, Priyanka is a huge proponent of reducing the gender gap in technology and encouraging girls to pursue careers in STEM. She believes that She Codes Art will play a vital role in changing the lives of many girls by preparing them to take on challenges in their STEM future. She feels blessed to be a part of such a tight-knit, giving community, and hopes to give back to it as much as possible.

Operations & Outreach Director
Anshita Saini ​​is a  sophomore in the gifted International Baccalaureate (IB) diploma program at Interlake High School. She absolutely loves many aspects of STEM, from rocket science to coding and computers. For the last two years, she captained two separate rocketry teams, one of which made to nationals for the Team America Rocketry Challenge. However, her first and foremost passion is certainly coding, which she cultivated by taking AP Computer Science as a freshman. She has extensive knowledge of Java, Javascript, HTML/CSS, and Python, and is currently applying her coding skills to a website product for Model United Nations in Bellevue. Anshita additionally enjoys many other activities, and is an officer for the Future Problem Solvers club at her school, as well as the manager for the competitive aspect of Interlake Aerospace Club. She has moreover been committed to competitive gymnastics for over 9 years, where she has received multiple accolades.
She was inspired to join She Codes Art after noticing and often lamenting the under-participation of students, especially girls, in STEM, and more specifically, in computer science. She feels extremely privileged to have the opportunities given to her to explore her interests in technology and hopes that She Codes Art can help others realize the same passion that she feels for STEM!
Thanks to all of our wonderful volunteers and our partners, Art You and Jubilee REACH, for making our initiative possible!